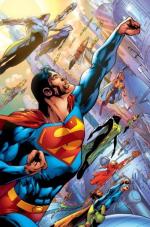 This encyclopedia article consists of approximately 2 pages of information about Krypton.

Krypton is the fourth member of Group 18 of the periodic table, a group of elements known as the noble gases or inert gases. Krypton's atomic number is 36, its atomic mass is 83.80, and its chemical symbol is Kr.

Krypton is a colorless, odorless, tasteless gas with a density of 3.64 grams per liter, nearly three times the density of air. Its boiling point is -243.2°F (-152.9°C) and its freezing point is -250.8°F (-157.1°C). Like other elements in Group 18, krypton is chemically inert. A few compounds of the element have been made for research purposes, but they have no commercial application.

The abundance of krypton in the atmosphere is thought to be about 0.000108-0.000114%, making it the seventh most common gas in the atmosphere. The element is also thought to be present in the Earth's crust as the result of natural radioactive processes, but its abundance there is too small to estimate. Krypton can be prepared commercially by the fractional distillation of liquid air.

Krypton was discovered in 1898 by the Scottish chemist and physicist Sir William Ramsay and the English chemist Morris William Travers (1872-1961). In the same year, Ramsay and Travers discovered two other noble gases, xenon and neon. The gases were discovered by careful analysis of the products that remained as liquid air evaporated over a period of time. The element was named after the Greek word kryptos meaning "hidden."

The only important commercial use of krypton is in making various kinds of lamps. When an electrical current is passed through an evacuated tube containing krypton gas, a very bright white light is produced. Tubes of this kind are used in specialized lamps, like those used along airport runways. The light produced is so bright that it can be seen for distances of up to 1,000 feet (300 meters) even in foggy conditions. Lights of this kind do not produce a continuous beam but give off pulses that last no more than about 10 microseconds. Krypton gas is also used in making "neon" lights with a yellow color.

More summaries and resources for teaching or studying Krypton.

Krypton from Gale. ©2005-2006 Thomson Gale, a part of the Thomson Corporation. All rights reserved.