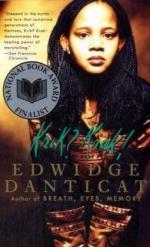 Krik? Krak! - Research Article from Literature and Its Times

Edwidge Danticat was born in Haiti on January 19, 1969, and immigrated to the United States in 1981. Dandicat received her bachelors degree in French literature from Barnard College and a masters degree in fine arts from Brown University. She began publishing short stories at the young age of 14, then produced her first novel, Breath, Eyes, Memory the following decade in 1995. Also that year she published Krik? Krak!a finalist for the National Book Award in 1995. Its stories figure into Danticats continuing effort to interject a degree of humanity into perceptions of a nation that is often publicly maligned because of its corrupt politicians and warring governmental factions. Amidst this turbulence, Danticat depicts the Haitians struggles to survive in their own country and in their adopted country of the United States.

Events in History at the Time the Short Stories Take Place

More summaries and resources for teaching or studying Krik? Krak!.

Krik? Krak! from Gale. ©2008 Thomson Gale, a part of the Thomson Corporation. All rights reserved.