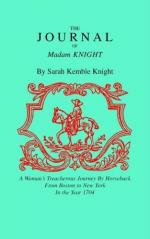 This encyclopedia article consists of approximately 5 pages of information about Knight, Sarah Kemble.

"I thought it proper to warn poor Travailers to endeavor to Avoid falling into circumstances like ours. . . . "

Sarah Kemble Knight is best known as the author of The Journal of Madame Knight (published in 1825), an account of her journey through New England in 1704. Her remarkable diary provides a detailed portrait of the landscape and culture of early colonial Connecticut and New York. It also reveals Knight's own strong personality, which enabled her to transcend the limitations placed on women. For instance, at that time many women could not read or write, let alone take on a difficult journey through the wilderness. In addition to writing the journal, Knight was a successful businesswoman and legal advisor.

Active in Business and Law