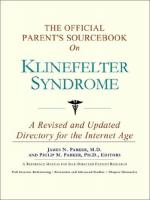 This encyclopedia article consists of approximately 1 page of information about Klinefelter&#x0027;s Syndrome.

A condition affecting males that is caused by the presence of extra X chromosomes.

Although individuals with Klinefelter's syndrome appear to be more likely to experience learning difficulties, the syndrome often remains undiagnosed. At puberty, a boy with more than one extra X chromosome may tend to develop enlarged breasts, a condition that can be treated with medication. In addition, the testes remain very small, and most males with Klinefelter's syndrome produce little or no sperm. In fact, it is during tests for infertility that Klinefelter's is most frequently diagnosed.

Strom, Charles. Heredity and Ability: How Genetics Affects Your Child and What You Can Do About It. New York: Plenum Press, 1990.

More summaries and resources for teaching or studying Klinefelter's Syndrome.

Klinefelter's Syndrome from Macmillan. Copyright © 2001-2006 by Macmillan Reference USA, an imprint of the Gale Group. All rights reserved.