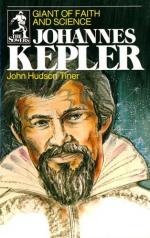 This encyclopedia article consists of approximately 1 page of information about Kepler, Johannes.

Johannes Kepler developed what came to be known as Kepler's three laws of planetary motion.

Johannes Kepler was a German mathematician and astronomer who discovered three key laws that govern planetary motion. Born in Weil der Stadt, Germany, in 1571, Kepler studied astronomy and theology at the University of Tübingen before becoming an astronomy and mathematics professor in Graz, Austria, in 1594. In 1600 he accepted an invitation from Danish astronomer Tycho Brahe to become Brahe's assistant in Prague, and study the orbit of the planet Mars.

After Brahe's death in 1601, Kepler acquired Brahe's extensive astronomical records and studied them for years in an effort to prove the Copernican model of the solar system. During this time he discovered what are now known as Kepler's three laws of planetary motion. The first law, published with the second in 1609, revealed that planets do not orbit in perfect circles, as had been previously assumed, but in ellipses, with the Sun at one focus. The second law found that planets sweep out equal areas in equal periods of time. The third law, published separately in 1619, stated that the square of a planet's orbital period is proportional to the cube of the orbit's mean radius. During this time Kepler also made advances in optics and mathematics. He died after a brief illness in Regensburg, Germany, in 1630.

More summaries and resources for teaching or studying Kepler, Johannes.

Kepler, Johannes from Macmillan. Copyright © 2001-2006 by Macmillan Reference USA, an imprint of the Gale Group. All rights reserved.