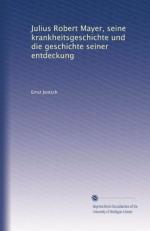 Julius Robert Mayer - Research Article from Science and Its Times

This encyclopedia article consists of approximately 1 page of information about Julius Robert Mayer.

German physiologist and physicist often credited with the first formulation of the principle of energy conservation, specifically the inter-conversion of electrical and magnetic energy, mechanical energy, and heat. Mayer's interest in the subject apparently began in 1840, when, serving as a ship's surgeon, he observed that the venous blood of sailors in the tropics was a brighter shade of red than in the northern latitudes, indicating less need to generate body heat through the oxidation of food.

Julius Robert Mayer from Gale. ©2005-2006 Thomson Gale, a part of the Thomson Corporation. All rights reserved.