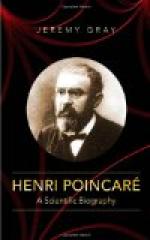 Jules-Henri Poincaré - Research Article from Science and Its Times

This encyclopedia article consists of approximately 3 pages of information about Jules-Henri Poincar&#xe9;.

Jules-Henri Poincaré was one of the greatest mathematicians of modern times. In an age of increasing specialization, he was among the last to see all mathematics, pure and applied, as his domain. He used mathematics to investigate many scientific problems, including the motion of the tides and planets, and theories of electricity and light. He was particularly skilled at developing general methods superseding whole collections of mathematical "tricks" used in specific situations. His literary abilities also contributed to the influence of his ideas. He published several widely read books on the philosophy of science, and was elected to the Académie Française on the strength of his writing.

Poincaré was born in the town of Nancy, France, on April 29, 1854, into an accomplished family. His father was a distinguished physician, and his mother was a gifted...

More summaries and resources for teaching or studying Jules-Henri Poincar.

Jules-Henri Poincaré from Gale. ©2005-2006 Thomson Gale, a part of the Thomson Corporation. All rights reserved.