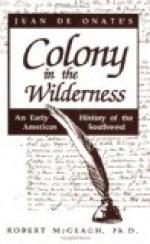 Juan De Oñate - Research Article from Science and Its Times

This encyclopedia article consists of approximately 1 page of information about Juan De O&#xf1;ate.

Spanish conquistador who established the colony of New Mexico and explored parts of western North America. Oñate, who married the granddaughter of Hernán Cortés (1485-1548), was born and raised in the New World. In 1598, he founded New Mexico with some 400 settlers, but his actions soon revealed that his principal interest was gold, and he dealt ruthlessly with Spaniards and Native Americans who got in the way of his ambition. During his 1601 expedition to what is now central Kansas, where he hoped to find the legendary city of gold at Quivira, most of the colonists in New Mexico escaped. Oñate led one final attempt to find gold, this time along the Colorado River to the Gulf of California. He was later tried and punished for his acts of cruelty, but appealed and received a reversal of his sentence.

Juan De Oñate from Gale. ©2005-2006 Thomson Gale, a part of the Thomson Corporation. All rights reserved.