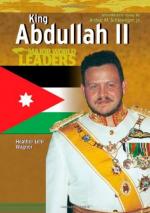 This encyclopedia article consists of approximately 10 pages of information about Jordan.

"Democracy is a learning experience. Down the line you will see a shift of responsibility as institutions mature."

The Hashemite Kingdom of Jordan is a landlocked country, except for its 26 km (16 mi) coastline along the Gulf of Aqaba, which provides access to the Red Sea. Its area occupies 91,880 sq km (35,475 sq mi), bordered on the north by Syria, northeast by Iraq, east and south by Saudi Arabia, and on the west by Israel. Amman, Jordan's capital, is also the country's largest city. The estimated population is about5.3 million, almost evenly divided between native Jordanian Arabs and Palestinian Arabs; most of the latter came as refugees from Israeli-held lands west of the Jordan River. The overwhelming majority of the people are Sunni Muslims. Christians constitute about 5% of the population. Arabic is the official language, and Islam is the...

Jordan - Abdullah II from Gale. ©2005-2006 Thomson Gale, a part of the Thomson Corporation. All rights reserved.