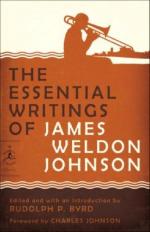 This encyclopedia article consists of approximately 1 page of information about Johnson, James Weldon (1871-1938).

James Weldon Johnson enjoyed success as a novelist, poet, songwriter, educator, diplomat, lawyer, and as an official of the National Association for the Advancement of Colored People (NAACP). A celebrated writer and active leader, Johnson was a venerated figure of the Harlem Renaissance. He believed that artistic achievement was a key to racial uplift, and he urged fellow African American artists to assimilate black folk culture into their work. His novel The Autobiography of an Ex-Colored Man (1912) explores the dilemmas faced by a light-skinned black man who turns away from his cultural heritage and decides to "pass" for white. Johnson's ideas and themes had a marked influence on the African American literary tradition, as shown in works by Jean Toomer and Ralph Ellison. Johnson was also a talented musician and songwriter who penned the lyrics to "Lift Every Voice and Sing" (1900), which has become the official song of the NAACP and is widely known as the "Black National Anthem."