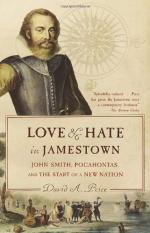 John Smith - Research Article from Science and Its Times

This encyclopedia article consists of approximately 1 page of information about John Smith.

English soldier, explorer, and adventurer. The son of a Lincolnshire farmer, he completed his elementary school education before being apprenticed to a merchant in Cambridgeshire. Beginning in 1599, he fought against the Spaniards in the Netherlands and later with the Hungarians against the Turks, rising to the rank of captain in the Imperial Army. Wounded, captured, and sold into slavery by the Turks, he escaped, later serving on a French privateer off the Moroccan coast. In 1606 Smith sailed with the Jamestown Expedition to Virginia, serving for a time as president of the colony. He explored the Potomac River region, learned much about Indian society, and became an enthusiastic promoter of English colonization in the New World. Returning to England in 1609, he briefly explored and mapped New England (which he first named) in 1614. Most of his remaining years were spent in England, writing at least eight books, including The Generall Historie of Virginia, New England, and the Summer Isles (1624) and The True Travels, Adventures, and Observations of Captain John Smith (1630). His maps and writings have much historical value.

John Smith from Gale. ©2005-2006 Thomson Gale, a part of the Thomson Corporation. All rights reserved.