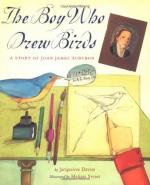 This encyclopedia article consists of approximately 7 pages of information about John James Audubon Publishes His Illustrated Birds of America (1827-1838).

Prior to 1827 the few published descriptions and illustrations of North American birds had been done in workmanlike but not definitive fashion. French-American artist-naturalist John James Audubon (1785-1851) changed this with the publication of his Birds of America, first in a limited elephant folio edition for wealthy subscribers and institutions and later (1840-44) in a smaller popular edition. This work forever changed the way in which Americans perceived their avian fauna.

From the mid-eighteenth century on, visitors to the British colonies in North America, and later the United States, wrote books and articles describing the birds and other fauna and flora they found there. English naturalist Mark Catesby (c. 1679-1749), in his Natural History of Carolina, Florida, and the Bahama Island (1731-1743), described and illustrated the animals and plants...

John James Audubon Publishes His Illustrated Birds of America (1827-1838) from Gale. ©2005-2006 Thomson Gale, a part of the Thomson Corporation. All rights reserved.