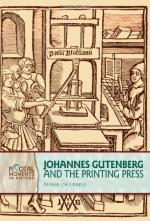 Johannes Gutenberg - Research Article from Science and Its Times

This encyclopedia article consists of approximately 3 pages of information about Johannes Gutenberg.

Johannes Gutenberg was a German craftsman whose invention of the moveable type printing process allowed for the first mass production of books, letters, and other written documents. His technique would survive virtually intact until the twentieth century.

Little is known of Gutenberg's early years; only that he was born in Mainz, the son of a wealthy aristocrat named Friele Gänsfleisch, whose lineage dates back to the thirteenth century. Gutenberg's last name was derived from the name of his father's ancestral home, zu Laden, zu Gutenberg. A craftsman by trade, he was exiled from Mainz during a feud between the patricians and tradesmen of the city around 1430. Gutenberg moved to Strassburg (now Strasbourg, France), and joined the goldsmith's guild. There, he also taught various crafts, including gem polishing, the manufacture of looking glasses, and the art of printing.

More summaries and resources for teaching or studying Johannes Gutenberg.

Johannes Gutenberg from Gale. ©2005-2006 Thomson Gale, a part of the Thomson Corporation. All rights reserved.