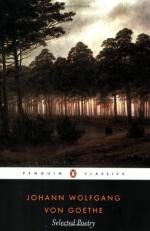 Johann Wolfgang Goethe was the last of the great universal scholars. He was the greatest German poet and an outstanding figure in many fields of writing. In addition to criticism, poetry, novels, and plays, his scientific writings filled 14 volumes. In his 82 years he achieved masterful wisdom and accomplishments. He was a strong advocate of natural theology—the finding of God in nature.

Goethe was born August 28, 1749, in Frankfurt am Main, now Germany. At that time Frankfurt was a free city-state. His father, Johann Caspar Goethe, was an attorney who taught his son the intellectual and moral discipline characteristic of the cities of northern Germany. His mother, Katharine Textor Goethe, the daughter of the mayor of Frankfurt, opened up contacts for her son to have artistic and cultural opportunities. Eight children were born to the couple but only Wolfgang and...