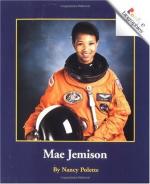 This encyclopedia article consists of approximately 7 pages of information about Jemison, Mae.

Mae Jemison went into space in 1992 aboard the space shuttle Endeavour. (A space shuttle is a craft that transports people and cargo between Earth and space.) Having been a physician before she became an astronaut, she performed scientific experiments during the eight-day voyage. The first science mission specialist sent into orbit by the National Aeronautics and Space Administration (NASA), she was also the first woman of African descent to travel in space. After leaving NASA, Jemison founded her own advanced technology companies and has been active in the field of education. Her goal is to use her knowledge and experience to solve problems faced by people on Earth.

Mae Carol Jemison was born on October 17, 1956, in Decatur, Alabama. She was the youngest of three children of Charlie Jemison, a custodian and contractor, and Dorothy Jemison...

More summaries and resources for teaching or studying Jemison, Mae.