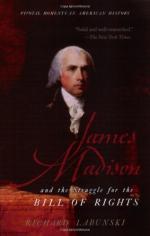 This encyclopedia article consists of approximately 11 pages of information about James Madison.

President of the United States, secretary of state, congressman

"The right of electing the members of the government constitutes … the essence of a free and responsible government."
Portrait: James Madison. Reproduced by permission of AP/Wide World Photos.

James Madison was a wealthy man with a careful but creative mind who gave his whole life to public service. He worked to gain American independence and helped establish the nation's new government. Madison is known as the person most responsible for making the Bill of Rights part of the U.S. Constitution.

James Madison, the first of ten children, was born in 1751 to a wealthy young couple, James and Eleanor Conway Madison. Members of the Madison family were longtime residents of Virginia and owned a great deal of land. Although he was frail and sickly, James Madison...