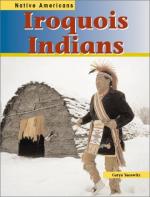 This encyclopedia article consists of approximately 32 pages of information about Iroquois Confederacy.

The Iroquois Confederacy, an association of six linguistically related tribes in the northeastern woodlands, was a sophisticated society of some 5,500 people when the first white explorers encountered it at the beginning of the seventeenth century. The 1990 Census counted 49,038 Iroquois living in the United States, making them the country's eighth most populous Native American group. Although Iroquoian tribes own seven reservations in New York state and one in Wisconsin, the majority of the people live off the reservations. An additional 5,000 Iroquois reside in Canada, where there are two Iroquoian reservations. The people are not averse to adopting new technology when it is beneficial, but they want to maintain their own traditional identity.

The "Five Tribes" that first joined to form the Iroquois Confederacy, or League, were the Mohawk, Oneida, Onondaga, Cayuga, and Seneca (listed in order from east to west according to where they lived...

More summaries and resources for teaching or studying Iroquois Confederacy.

Iroquois Confederacy from Gale. ©2005-2006 Thomson Gale, a part of the Thomson Corporation. All rights reserved.