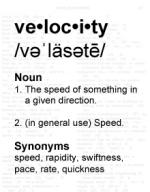 Integrating Acceleration and Velocity - Research Article from World of Mathematics

This encyclopedia article consists of approximately 1 page of information about Integrating Acceleration and Velocity.

The ideas of acceleration and velocity are quite familiar to anyone who drives a car, and most people use their integration indirectly, without knowing they are doing so. Acceleration is the rate of change of the speed of an object, and velocity is the rate of change of position of an object. Both rates of change are with respect to some time. Since they are both time rates of change, the integral over each will give the value of the quantity that is changing. That is, the integral of acceleration over time will yield velocity, and the integral of velocity over time results in position.

Recognizing the integral relationship of these three kinematic quantities can give insight into the physical system they represent. If the boundary conditions--the values of the integrated quantity at the beginning and end of the integration period--are known, then numerical averages can be calculated. This is more complicated and more precise than figuring out how far a car has gone by multiplying its speed times the amount of time traveled, but the underlying concept is the same. If the boundary conditions are not known, then a general equation for either velocity or position (depending) will result. This general equation can be analyzed for patterns of behavior: free fall, simple harmonic motion, and other common situations will be easily recognizable.

More summaries and resources for teaching or studying Integrating Acceleration and Velocity.

Integrating Acceleration and Velocity from Gale. ©2005-2006 Thomson Gale, a part of the Thomson Corporation. All rights reserved.