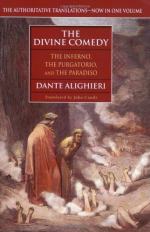 Inferno - Research Article from Literature and Its Times

Dante Alighieri
This encyclopedia article consists of approximately 11 pages of information about Inferno.

Exiled from his native town of Florence, Dante Alighieri wrote the Divine Comedy, the first part of which is Inferno, as he wandered from city to city in northern Italy between 1301 and 1314. The poem reflects the political and social turmoil that plagued the region at the time.

Florentine politics. In the early fourteenth century, Italian cities were engaged in making important decisions about their methods of government. The cities had a confusing array of choices, each championed by elements of society that were competing for control. Competitors included the popes in Rome, who wanted to incorporate the cities of Tuscany (an area of northem Italy) into the "Papal States"; the Holy Roman Emperors, German aristocrats who claimed an ancient right to rule Christendom; the local noblemen, who favored rule by a small, select group; and the...

Inferno from Gale. ©2008 Thomson Gale, a part of the Thomson Corporation. All rights reserved.