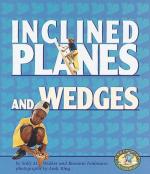 This encyclopedia article consists of approximately 1 page of information about Inclined Plane.

The inclined plane is one of the simple machines of antiquity, the physical operations of which were first theorized by Archimedes in the second century B.C., and then further explained by Hero of Alexandria in the first century A.D..

More summaries and resources for teaching or studying Inclined Plane.

Inclined Plane from Gale. ©2005-2006 Thomson Gale, a part of the Thomson Corporation. All rights reserved.