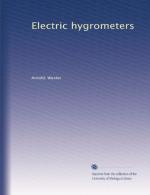 This encyclopedia article consists of approximately 2 pages of information about Hygrometer.

A hygrometer gauges atmospheric humidity by measuring the reaction of certain substances to changes in the amount of water vapor present in the air. Hygrometers are used in meteorology and to regulate humidity in buildings and industrial processes.

The hygroscopic hygrometer was first built in the early 1400s by Cardinal Nicholas de Cusa, a German mathematician. This type of hygrometer used the change in the weight, length, or twist (as with twine) of a moisture-absorbing substance to determine humidity. Although the Italian inventorLeonardo da Vinci was reported to have constructed a hygrometer around 1500, little attention was given to improving the instrument over the next century; it was not until the latter half of the 1600s that other methods were developed. One type of hygrometer used a paper strip, weighted at the middle and attached to a board. The weight would rise and fall as the strip released or absorbed moisture. Another type--the condensation hygrometer--collected dew in a cup placed under a pointed vessel filled with cold water.

In 1687, Guillaume Amontons developed a hygrometer that was similar to a three-liquid barometer. The changing volume of a mercury-filled absorbent bag at the end of a tube moved the interface level of two other immiscible (non-mixing) liquids up and down in the tube.

The eighteenth century brought more improvements for measuring humidity. Extensive studies into the properties of water vapor were made by Johann Heinrich Lambert in 1774, who built and studied hygrometers and first suggested the term "hygrometer." In 1775, Horace Benedict de Saussure (1740-1799) developed the hair hygrometer in which a suspended hair moved an indicator as the humidity changed. Jean Andre Deluc's (1727-1817) hygrometer used an ivory bulb that when damp allowed mercury to move down a tube.

The psychrometer was first developed by James Hutton (1726-1797) during the late 1700s. It measured the cooling effect of evaporating moisture on a thermometer bulb. In 1800, John Leslie (1766-1832) announced his creation of a simpler psychrometer that consisted of two thermometers mounted and attached to a handle. After rotating the thermometers--one covered with a dry cloth, the other with a wet cloth--through the air, the temperature difference was compared against a humidity chart to arrive at the final humidity measurement.

About 1819, John Frederic Daniell invented the dew-point hygrometer from which the mean temperature of the appearance and disappearance of dew was calculated.

More summaries and resources for teaching or studying Hygrometer.

Hygrometer from Gale. ©2005-2006 Thomson Gale, a part of the Thomson Corporation. All rights reserved.