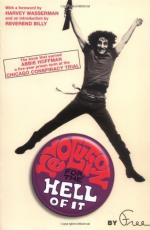 This encyclopedia article consists of approximately 9 pages of information about Hoffman, Abbie.

During the troubled 1960s and into the 1970s, few people challenged authority more defiantly or urged radical social change more strongly than activist Abbie Hoffman. A dedicated political organizer, Hoffman was also a prankster who knew how to use the media to bring his causes to national attention. He was arrested fifty-three times during his days as an activist. Hoffman used his comic personality and outrageous antics to lighten up serious political discussion. He used his sharp political intelligence to encourage social awareness in rebellious youth. Conservatives and less extreme radicals were often irritated by Hoffman's outrageous behavior and thought he was being disrespectful. However, he viewed himself as a "cultural revolutionary." Throughout his life, he worked in his own way to create...

More summaries and resources for teaching or studying Hoffman, Abbie.