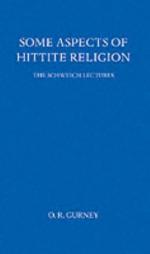 This encyclopedia article consists of approximately 20 pages of information about Hittite Religion.

HITTITE RELIGION. The exact origin of the Hittites, an Indo-European people, is not known. Invading Asia Minor from the east, by the middle of the second millennium BCE they had established an empire covering the greater part of that region. Their empire declined after 1200 BCE, owing to Indo-European invasions and the growing power of Assyria.

Knowledge about Hittite society, culture, and religion has increased since the deciphering of their cuneiform writing, on clay tablets found early in the twentieth century CE at Bogazköy (in Turkey). Hittite society was ethnically and linguistically diverse, with Hattian, Hurrian, and even some Semitic elements, and this diversity is evident in the divine names.

The earliest identifiable stratum is the Hattian. The Hattians were resident in central Anatolia before the Indo-European Hittites arrived. They had a long tradition of settled urban life. It is understandable that a...

More summaries and resources for teaching or studying Hittite Religion.

Hittite Religion from Macmillan. Copyright © 2001-2006 by Macmillan Reference USA, an imprint of the Gale Group. All rights reserved.