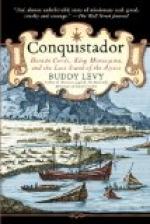 Hernán Cortés - Research Article from Science and Its Times

This encyclopedia article consists of approximately 3 pages of information about Hern&#xe1;n Cort&#xe9;s.

Hernán Cortés was a Spanish conquistador who succeeded in claiming most of present-day Mexico for Spain by conquering the Aztec people in their capital city of Tenochtitlan.

Cortés was born in the region of Medellin, Spain, to parents of good social standing. Cortés was sent to the University of Salamenca at the age of 14 where, among other subjects, he studied Latin for two years. Following his studies, Cortés set out to make his way in life. His imagination ignited with the possibilities that awaited in the Indies recently discovered by Christopher Columbus (1451-1506), Cortés sailed, at age 19, to Hispaniola (present-day Santo Domingo) in 1504.

Cortés spent approximately six years as a farmer in Hispaniola, then in 1511 joined Diego Velazquez (1465?-1522), with whom he became an intimate friend, on an...

More summaries and resources for teaching or studying Hernn Corts.

Hernán Cortés from Gale. ©2005-2006 Thomson Gale, a part of the Thomson Corporation. All rights reserved.