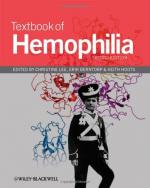 This encyclopedia article consists of approximately 5 pages of information about Hemophilia.

Hemophilia A and hemophilia B are genetic disorders in the blood-clotting system, characterized by bleeding into joints and soft tissues, and by excessive bleeding into any site experiencing trauma or undergoing surgery. Hemophilia A and B are clinically indistinguishable. Both have the same type of bleeding manifestations, and both affect males almost exclusively.

The coagulation cascade involves multistep conversion of several factors into their active (A) forms. In hemophilia, factors VIII or IX are missing or present in insufficient amounts.
The two conditions can be distinguished by detecting the responsible defective proteins.

Contrary to popular belief, individuals with hemophilia rarely bleed excessively from minor cuts or scratches. Hemophilia A and B are both worldwide in distribution, affecting all racial and ethnic groups. The prevalence of hemophilia A is approximately 1 in 10,000 males, and that of hemophilia B is 1 in 30,000 males.

The disorder was recognized (although not named) in Babylonian...

More summaries and resources for teaching or studying Hemophilia.

Hemophilia from Macmillan. Copyright © 2001-2006 by Macmillan Reference USA, an imprint of the Gale Group. All rights reserved.