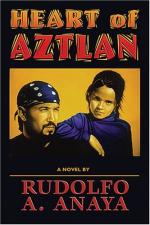 Heart of Aztlan - Research Article from Literature and Its Times

This encyclopedia article consists of approximately 12 pages of information about Heart of Aztlan.

Rudolfo A. Anaya was born and raised in a small New Mexican village called Santa Rosa. During his youth, he helped his father work on his farm, or ranchito, watched his mother make tortillas in her kitchen, and walked along the plains, or llanos, with his grandfather, who told him mythical stories known as cuentos. In writing Heart of Aztldn, Anaya culled material from memories of his youth in New Mexico and told the story of a family who moved from a rural village much like Santa Rosa to a Mexican American neighborhood in the city of Albuquerque.

Migration to cities. Throughout the twentieth century various groups of people, from farmers to African Americans to Mexican Americans, have migrated out of rural areas into cities. There were a number of...

More summaries and resources for teaching or studying Heart of Aztlan.

Heart of Aztlan from Gale. ©2008 Thomson Gale, a part of the Thomson Corporation. All rights reserved.