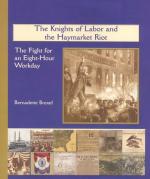 This encyclopedia article consists of approximately 11 pages of information about Haymarket Riot.

The Haymarket Riot, which is also often referred to as the Haymarket Massacre or the Haymarket Incident, was a radical labor protest meeting on 4 May 1886 in Chicago, Illinois, that turned deadly. Although the assembly began peacefully, an unknown person threw a dynamite bomb when the police began to raid the meeting. While the identity of the bomb thrower has never been determined, hysteria over the event, which had been organized by anarchists, was sufficient to secure the conviction of eight people for murder and conspiracy, despite little or no evidence to prove the charges brought against them. Four men were eventually hanged for a crime they did not commit.

More summaries and resources for teaching or studying Haymarket Riot.

Haymarket Riot from Gale. ©2005-2006 Thomson Gale, a part of the Thomson Corporation. All rights reserved.