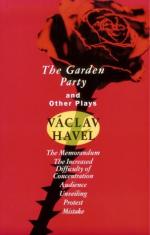 Havel, Vaclav - Research Article from Governments of the World

This encyclopedia article consists of approximately 3 pages of information about Havel, Vaclav.

Vaclav Havel is a Czech intellectual, writer, dramatist, and dissident who became the first president of Czechoslovakia after the yoke of the communist dictatorship was discarded as a consequence of the "Velvet Revolution" in 1989. He was viewed by many in Czechoslovakia and in the larger West as one of the founding fathers of democracy in post-Cold War Europe.

Vaclav Havel was born in 1936 to bourgeois parents who would lose much after the communist takeover of Czechoslovakia after World War II (1939–1945). He was apparently a precocious child, and by the time he was fifteen, he was writing poetry, had founded a literary group among his high school friends that organized symposia, and even published a typewritten magazine. Despite his interests in the arts, he was not admitted to the Academy of Performing Arts and, instead, entered the Czechoslovak University of Technology to study...

More summaries and resources for teaching or studying Havel, Vaclav.

Havel, Vaclav from Macmillan. Copyright © 2001-2006 by Macmillan Reference USA, an imprint of the Gale Group. All rights reserved.