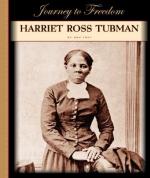 This encyclopedia article consists of approximately 8 pages of information about Harriet Tubman.

Harriet Tubman, an escaped slave, was the most famous of all “conductors” on the Underground Railroad. The Underground Railroad was an elaborate system of safe houses and secret routes through which slaves escaped to freedom beginning in the 1840s. The escape routes stretched from southern slave states (primarily Kentucky, Delaware, and Maryland), to northern states and Canada, where slavery was illegal. “Conductors” were people who ventured into the American South to pick up slaves and lead them to freedom.

After her escape in 1849, Tubman returned to the South nineteen times and rescued hundreds of slaves. Among the slaves she liberated were her elderly parents and ten of her brothers and sisters. Tubman never lost a passenger. She was never captured, despite a...

Harriet Tubman from UXL. ©2005-2006 by U•X•L. U•X•L is an imprint of Thomson Gale, a division of Thomson Learning, Inc. All rights reserved.