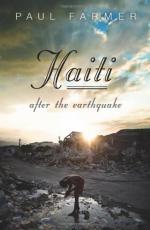 This encyclopedia article consists of approximately 11 pages of information about Haiti.

"Power no longer resides with the bayonet but instead with the people's ballots."

The Republic of Haiti occupies the western third of the Caribbean island of Hispaniola, with a total area of 27,750 sq km (10,714 sq mi). The capital is Port-au-Prince, located in the southeastern region of the country. Haiti shares the island with the neighboring Dominican Republic. Cuba lies about 80 km (50 mi) to the west; the Bahamas are to the north. The population has been estimated at 7 million. Ninety-five percent of Haitians are of African descent; the other 5% are mixed African-Caucasian. Haiti is one of the world's most densely populated countries, with 277 people per sq km (717 per sq mi); 65% of Haitians live in rural areas. Roman Catholicism, the state religion, comprises 80% of the population, while Protestantism makes up 16%. Voodoo practice is widespread, and most Haitians...

Haiti - Jean-Bertrand Aristide from Gale. ©2005-2006 Thomson Gale, a part of the Thomson Corporation. All rights reserved.