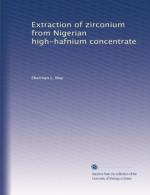 This encyclopedia article consists of approximately 1 page of information about Hafnium.

Hafnium is a transition metal, one of the elements in the middle of the periodic table. It is found in Group 4 and Row 6 of the table. Hafnium's atomic number is 72, its atomic mass is 178.49, and its chemical symbol is Hf.

Hafnium is a bright, silvery gray metal that is very ductile. Its melting point is 3,900°F (2,150°C), its boiling point is about 9,750°F (5,400°C), and its density is 13.1 grams per cubic centimeter. A very useful property of hafnium is its ability to absorb large quantities of neutrons per square centimeter of surface area. Chemically, hafnium is not very active. It reacts with oxygen, acids, and other reagents only at higher temperatures.

Hafnium is a moderately common element in the Earth's crust with an abundance estimated at about 5 parts per million. The element is almost invariably found in conjunction with ores of zirconium, especially zircon and baddeleyite. Hafnium is separated from zirconium with considerable difficulty, usually by using the differential solubility of the two elements in various solvents.

For most of history, hafnium and zirconium were not clearly distinguished from each other. The two elements usually occur together and they have similar chemical properties. Hafnium was finally identified as a distinct chemical element in 1923 by the Dutch physicist Dirk Coster (1889-1950) and the Hungarian chemist Georg von Hevesy by x-ray analysis of the mineral Norwegian zircon. The element's name is derived from the ancient name of the city of Copenhagen, Hafnia.

Hafnium and its compounds have relatively few commercial uses. The metal is sometimes used in the manufacture of control rods for nuclear power plants because of its strong attraction for neutrons. Some compounds of hafnium are also used as refractory substances to line the inside of high-temperature ovens.

More summaries and resources for teaching or studying Hafnium.

Hafnium from Gale. ©2005-2006 Thomson Gale, a part of the Thomson Corporation. All rights reserved.