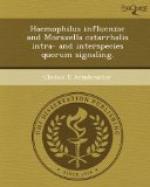 This encyclopedia article consists of approximately 1 page of information about Haemophilus Influenzae Type B.

Bacteria that can cause several serious illnesses in unvaccinated individuals.

Haemophilus influenzae type B (HiB) is a bacteria that can cause serious infections, including meningitis and epiglottitis. Although the word influenzae may imply a relation to influenza, or the "flu," the two diseases are unrelated. Influenza is caused by a virus, not bacteria. Other less common infections caused by H. influenzae type B include pneumonia and infections in the blood, bones, joints, skin, and the membrane covering the heart. Before the availability of the Haemophilus influenzae type B (HiB) vaccine, thousands of children under the age of five became seriously ill with meningitis and epiglottitis. Meningitis describes any infection of the membranes that cover the spinal cord and brain, whether caused by a virus, or more seriously, by bacteria such as H. influenzae type B. Prior to availability of the vaccine, about 12,000 cases of meningitis in children under five occurred in the United States each year; one in 20 of those infected died from the disease, and one in four developed permanent brain damage. Vaccines for this bacteria are available, and new ones were being developed as of the late 1990s. The American Academy of Pediatrics issues recommendations and advice on new vaccines as they become available.

More summaries and resources for teaching or studying Haemophilus Influenzae Type B.

Haemophilus Influenzae Type B from Gale. ©2005-2006 Thomson Gale, a part of the Thomson Corporation. All rights reserved.