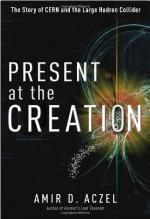 This encyclopedia article consists of approximately 1 page of information about Hadron.

Hadrons are subatomic particles that are affected by the strong force, the force that binds the nucleus together. Two hadrons--the proton and the neutron--are found in the atomic nucleus. All others are created by high-energy collisions, from cosmic rays and particle accelerators. Hadrons are combinations of basic particles, quarks and gluons, held together by the strong force. Quarks contribute mass and determine the hadrons properties, including electronic charge and spin. Gluons carry the strong force and hold the quarks together. All known subatomic particles except bosons (such as photons) and leptons (such as electrons and neutrinos) are hadrons. They are divided into two categories: baryons, made of three quarks, and mesons, made of a quark and an anti-quark.

All mesons and all the baryons, except the proton, are unstable and decay into other particles. Most of them exist for less than a millionth of a second, and some can survive only for the amount of time that it takes for a light wave to pass from one side to the other. Their existence is known by observation of the products and process of particle decay. Although a free neutron will decay in an average of about 15 minutes, neutrons bound within an atomic nucleus are stable. Some theories indicate that the proton may have some instability, but its half-life is very much longer than the age of the universe.

Particle physicists have discovered a large number of hadrons. The Review of Particle Physics, published every other year, contains more than 300 pages, listing particle types and their observed decay processes.

More summaries and resources for teaching or studying Hadron.

Hadron from Gale. ©2005-2006 Thomson Gale, a part of the Thomson Corporation. All rights reserved.