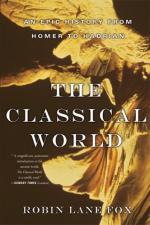 Hadrian - Research Article from Science and Its Times

This encyclopedia article consists of approximately 3 pages of information about Hadrian.

During his more than 20 years as emperor, Hadrian traveled throughout Rome's vast empire, ensuring the well being of its citizens, building its defenses, and overseeing great public works projects, including construction of the wall in southern Britain that bears his name.

Hadrian, whose full Latin name is Publius Aelius Hadrianus, was believed to have been born in his family's homeland, Italica, which is now in southern Spain. His father died when he was just 10 years old, and he went to live with his cousin, Ulpius Trajanus. Hadrian returned to Italica five years later and received his military training, but he remained there for only a few years before moving to Rome and beginning his ascent to power. He served as military tribune with three Roman legions in the provinces of Upper and Lower Moesia.

In 97 he was summoned to Gaul to convey congratulations to the...

More summaries and resources for teaching or studying Hadrian.

Hadrian from Gale. ©2005-2006 Thomson Gale, a part of the Thomson Corporation. All rights reserved.