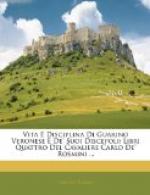 This encyclopedia article consists of approximately 1 page of information about Guarino Veronese.

Italian scholar and pioneer of Greek studies in Western Europe who translated numerous ancient works into Latin and edited several Roman writings. Sometimes known as Guarino da Verona, he studied at Constantinople, and returned to his homeland with a number of manuscripts. These he translated over the course of his career during which Guarino taught in various places around Italy. Among his works were translations of the geographer Strabo (c. 63 B.C.-A.D. 24) and the biographer Plutarch (c. 46-c. 119), and editions of the playwright Plautus (c. 254-184 B.C.), the historian Livy (59 B.C.-A.D. 17), and the scholar Pliny the Elder (A.D. 23-79).

More summaries and resources for teaching or studying Guarino Veronese.

Guarino Veronese from Lucent. ©2002-2006 by Lucent Books, an imprint of The Gale Group. All rights reserved.