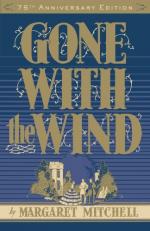 Gone with the Wind - Research Article from Literature and Its Times

Margaret Mitchell
This encyclopedia article consists of approximately 14 pages of information about Gone with the Wind.

Born in 1900, Margaret Mitchell grew up in Atlanta, Georgia. More than thirty years before her birth, Atlanta had been burned to the ground by the Union army during the Civil War. It was rebuilt rather quickly, but memories of that era remained deeply etched in the minds of the Mitchells and other Southern families. As a child, the author heard many stories from older relatives who had lived through the Civil War in northern Georgia. Their stories helped her establish a life-like setting for her best-known work, Gone with the Wind.

The antebellum South. Agriculture formed the backbone of the Southern economy before the Civil War. The vast majority of Southern whites were modest farmers who worked small tracts of land with their own labor. Only one percent of...

More summaries and resources for teaching or studying Gone with the Wind.

Gone with the Wind from Gale. ©2008 Thomson Gale, a part of the Thomson Corporation. All rights reserved.