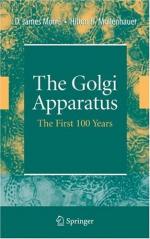 This encyclopedia article consists of approximately 2 pages of information about Golgi Apparatus.

The Golgi apparatus is a collection of flattened membrane sacks called cisternae that carry out the processing, packaging, and sorting of a variety of cellular products in higher plants and animals. This important cellular organelle was named in honor of Camillo Golgi, a famous Italian neuroanatomist, who first described it in brain cells late in the nineteenth century. An individual Golgi apparatus is usually composed of four to eight cisternae, each a micron or less in diameter stacked on top of each other like pancakes. Many cisternal stacks interconnected by tubules and mobile transport vesicles make up a Golgi complex, which often is located near the nucleus in the center of the cell. In some animal cells, this complex can be huge, filling much of the cytoplasmic space. In some plant cells, on the other hand, many small, apparently independent Golgi apparatuses are distributed throughout the cell interior.

Each Golgi stack has a distinct orientation. The cis or entry face is the site at which transport vesicles bringing newly synthesized products from the endoplasmic reticulum dock with and add their contents to the Golgi cisternae. A complex network of anastomosing membrane tubules attach to and cover the fenestrated cisternae on the cis face and serves as a docking site for transport vesicles. From the cis face a flow of vesicles carry transport and chaperone proteins back to the endoplasmic reticulum, while secretory products move on into the medial cisternae where further processing takes place. Finally, the products move to the trans or exit face where they undergo final processing, sorting, and packaging into vesicles that will carry them to the cell surface for secretion or to other cellular organelles for storage or use. Complex oligosaccharides are synthesized in the Golgi apparatus, and glycoproteins are assembled as materials move through the compartments of this organelle. A unique set of enzymes and chaperone proteins occur in each of the Golgi compartments to direct and carry out this complex set of reactions.

More summaries and resources for teaching or studying Golgi Apparatus.

Golgi Apparatus from Gale. ©2005-2006 Thomson Gale, a part of the Thomson Corporation. All rights reserved.