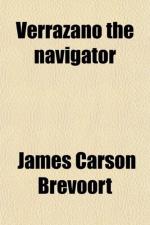 Giovanni Da Verrazzano - Research Article from Science and Its Times

This encyclopedia article consists of approximately 1 page of information about Giovanni Da Verrazzano.

Italian discoverer who was the first European to explore and chart the Atlantic coastline from Newfoundland to as far south as North Carolina, including what is now known as the New York harbor. In the service of the King of France, Verrazzano began the voyage with the goal of finding a waterway that would connect the Atlantic Ocean to the Pacific, and ultimately Asia. While he didn't find a passage, he was successful in describing the eastern coast of North America. He led later voyages to Brazil and to the West Indies, where he died in 1528 at the hands of a Carib tribe.

Giovanni Da Verrazzano from Gale. ©2005-2006 Thomson Gale, a part of the Thomson Corporation. All rights reserved.