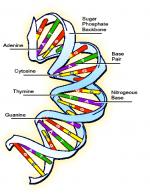 This encyclopedia article consists of approximately 1 page of information about Genetic System.

A genetic system is how the genetic material of a given species is organized and transmitted. It is the arrangement of the inheritable material within an organism, and how that material is transmitted to the next generation.

With all eukaryotic organisms, the genetic material is contained in specific structures. It is usually located in the nucleus, although some DNA can also be contained in various cell organelles such as the mitochondria, or in the chloroplasts of plants. The majority of living organisms are eukaryotes.

The method of transmission of the genetic material is initially similar for all organisms. First, in all organisms, the genetic material must be reproduced. Differences begin to occur in the transmission process. With lower organisms, a simple process of splitting, or binary fission, takes place, dividing the cell contents between the resulting new organisms. With higher organisms, more complex systems operate, ensuring a mix of genetic material from different individuals. This process involves the production of gametes which fuse to produce a zygote. The exact details of how this process is carried out vary dramatically within the living world.

The genetic system has the same function for all living organisms, however, the exact mechanics can differ, even between quite closely related species.

More summaries and resources for teaching or studying Genetic System.

Genetic System from Gale. ©2005-2006 Thomson Gale, a part of the Thomson Corporation. All rights reserved.