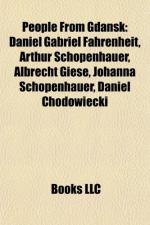 Gabriel David Fahrenheit - Research Article from Science and Its Times

This encyclopedia article consists of approximately 1 page of information about Gabriel David Fahrenheit.

German physicist and instrument maker who invented the mercury thermometer (in 1714) and developed the Fahrenheit temperature scale. The thermometer, however, was not generally adopted as a clinical instrument until the 1860s. Because the zero point on Fahrenheit's original scale was the temperature of an ice-salt mixture, the freezing point of water on his scale is 32°, normal body temperature is 98.6°, and the boiling point of water is 212°. Although the Fahrenheit scale is still commonly used in the United States, scientists and most other nations have adopted the Celsius scale.

Gabriel David Fahrenheit from Gale. ©2005-2006 Thomson Gale, a part of the Thomson Corporation. All rights reserved.