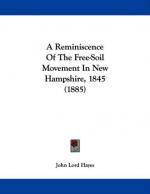 This encyclopedia article consists of approximately 8 pages of information about Free Soil Party.

Launched in 1848, the Free Soil Party sought to prohibit slavery in new U.S. territories acquired in the Mexican War. An upstart third party in the 1848 election, the Free Soilers made a promising showing with Martin Van Buren as their presidential candidate. Eleven Free Soilers also won congressional seats, but the party was unable to forge a strong, unified rival to the two major parties. Although short-lived, the Free Soilers had an impact on the two major political parties, the Whigs and Democrats, and made the expansion of slavery a national political issue. When the Free Soil Party dissolved in 1854 to join the newly formed Republican Party, its members allied with a party whose platform supported their commitment to prohibit the extension of slavery while maintaining the Union.

Free Soil Party from Gale. ©2005-2006 Thomson Gale, a part of the Thomson Corporation. All rights reserved.