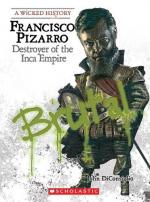 This encyclopedia article consists of approximately 5 pages of information about Francisco Pizarro.

Francisco Pizarro was one of several Spanish soldiers of fortune called conquistadors who came to the New World to seize an empire for Spain. Pizarro’s field of conquest was Peru; his relative, Hernán Cortés (see entry), added Mexico to Spain’s possessions. In subduing the Incas, Pizarro took wealth so vast that it is difficult to imagine, even by today’s standards. Spain instantly became the most powerful country in the world, and Peru, its residents inspired by religious zeal, was quickly converted to Catholicism.

Pizarro was born sometime around the year 1475 in the town of Trujillo in the Spanish province of Extremadura. He was the illegitimate son of Colonel Gonzalo Pizarro and a peasant woman. Having no formal education, Pizarro was illiterate and worked as a swineherd during his...

More summaries and resources for teaching or studying Francisco Pizarro.

Francisco Pizarro from UXL. ©2005-2006 by U•X•L. U•X•L is an imprint of Thomson Gale, a division of Thomson Learning, Inc. All rights reserved.