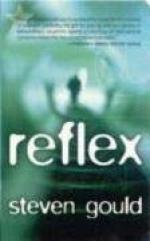 This encyclopedia article consists of approximately 2 pages of information about Fight or Flight Reflex.

The fight of flight reflex readies the body for survival during stressful situations. Interactions between the neural and hormonal systems of the body work together to get the body ready to stand and fight the challenge or run away from it (flight).

When faced with life-threatening crises, unnecessary functions are temporarily shut down and energies are diverted to functions vital to survival. Any stress, whether physical, psychological (anticipation of an unpleasant event) or emotional (anger or fear) will produce some, if not all elements of the fight or flight response.

The term "fight or flight" as coined in the 1920s by the American physiologist, Walter B. Cannon. He described the response to be a generalized sympathoadrenal activation since it involves participation of both the sympathetic nervous system and the tissues of the adrenal medulla within the adrenal gland. When the body is threatened or frightened, innervation via the sympathetic nerves causes the cells of the adrenal medulla to secrete the hormones epinephrine and nor-epinephrine (catecholamines). Because the sympathoadrenal system is in the efferent limb of the nervous system, catecholamine-mediated events take place in seconds. The course of action of most hormones is much longer.

Immediate catecholamine release into the bloodstream affects many organs. Mental activity and awareness is increased to help assess the situation. Airways dilate and breathing rate is increased. Peripheral blood vessels are constricted (pale skin) and blood is sent to skeletal muscles giving them increases strength and endurance. Cardiac output increases as does heart rate and blood pressure rises allowing more oxygen and nutrients to reach the tissues. Conversion of glycogen stores in the liver to glucose speeds up to allow blood glucose levels to rise. This makes more glucose available for cells to produce ATP for cellular energy via cellular respiration. Secretion of sweat glands increase to cool the body and apocrine glands under the armpits produce strong secretions (perhaps to frighten away challengers). Pupils of the eyes dilate to bring in more light and the ciliary muscles of the lens relax to facilitate far-sightedness. Non-essential processes for defence or running such as digestion temporarily decrease, as does renal output. Bowel and bladder sphincters close and the immune system is suppressed.

More summaries and resources for teaching or studying Fight or Flight Reflex.

Fight or Flight Reflex from Gale. ©2005-2006 Thomson Gale, a part of the Thomson Corporation. All rights reserved.