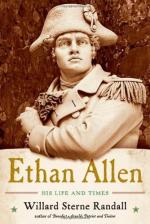 This encyclopedia article consists of approximately 8 pages of information about Ethan Allen.

"In the name of the Great Jehovah and the Continental Congress!" Ethan Allen's legendary reply to a British officer asking him by whose authority he had entered the British-held Fort Ticonderoga
Portrait: Ethan Allen.

The fiery Ethan Allen was one of the first heroes of the American Revolution. He is remembered for leading a small group of soldiers against the British at Fort Ticonderoga, New York, in May 1775, and winning the surrender of the fort with no bloodshed. He is honored as the folk-hero of Vermont for strongly promoting its statehood and representing Vermonters' independent spirit.

Little is known about the early life of Ethan Allen. He was born in Connecticut in 1738, one of eight children of Joseph and Mary Baker Allen. His father died when the boy was preparing for college in 1755, cutting...

More summaries and resources for teaching or studying Ethan Allen.