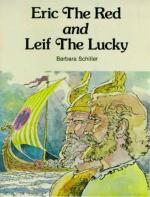 Erik the Red - Research Article from Explorers and Discoverers

This encyclopedia article consists of approximately 4 pages of information about Erik the Red.

Erik the Red was a Norse explorer whose most important voyage began as the result of a violent feud. He was banished from his home in Iceland for three years as punishment for killing two men. During this exile, he became the first European to land on Greenland. He later established Norse colonies that endured in Greenland for the next 500 years.

Erik’s travels began early in life. He was born in southwestern Norway near the town of Stavanger. His father became involved in a feud with another family and killed a man. In those days, such a crime was punished with exile in Iceland, which had first been settled by the Norwegians in the 870s. Erik’s family moved to a remote part of western Iceland.

After he was grown and...

More summaries and resources for teaching or studying Erik the Red.