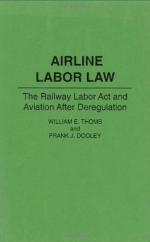 This encyclopedia article consists of approximately 8 pages of information about Erdman Act.

The Erdman Act, an early step toward the passage of the more comprehensive Railway Labor Act of 1926, was a federal law that attempted to alleviate labor unrest in the railroad industry by requiring mediation of any labor dispute "seriously interrupting or threatening to interrupt" interstate commerce. In the event that mediation failed, the act provided for an arbitration board whose decision would be binding. Additionally, Section 10 of the act prohibited the railroads from requiring as a condition of employment any discriminatory agreements pertaining to union membership.

More summaries and resources for teaching or studying Erdman Act.

Erdman Act from Gale. ©2005-2006 Thomson Gale, a part of the Thomson Corporation. All rights reserved.