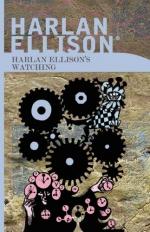 This encyclopedia article consists of approximately 1 page of information about Ellison, Harlan (1934&#x2014;).

Diminutive author Harlan Ellison has been called "one of the great living American short story writers." He has been called a lot worse by the many enemies with whom he has sparred in print, online, and in countless combative convention appearances. Ellison, whose major works include "I Have No Mouth and I Must Scream" and "Jeffty Is Five," began writing professionally at age 15, when his first story appeared in The Cleveland News. Since then he has been a prolific, at times logorrheic, presence on the American literary scene, penning essays, reviews, and teleplays in addition to his speculative fiction. A self-proclaimed humanist, Ellison writes dark fantasies that challenge the technological optimism prevalent in the science fiction genre. His idiosyncratic style has put off many mainstream science fiction readers, but few living scribes have been nominated for as many different honors (including, at last count, an Emmy, a Grammy, and a Humanitas Prize) as this complex, controversial figure.

More summaries and resources for teaching or studying Ellison, Harlan (1934-).