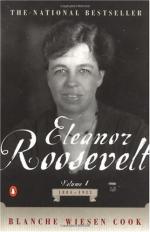 "Few Americans … were neutral in their feelings about this powerful woman who refused to accept the traditional role of a president's wife."
—From No Ordinary Time: Franklin and Eleanor Roosevelt, the Home Front in World War II
Eleanor Roosevelt. © Bettmann/Corbis. Reproduced by permission.

Eleanor Roosevelt served as first lady from March 1933 to April 1945, longer than any other president's wife. She also was one of the first first ladies to work tirelessly for social reforms both in the United States and worldwide. Checking on conditions throughout the nation during World War II (1939–45) and earlier, she was President Franklin D. Roosevelt's (1882–1945; served 1933–45; see entry) "eyes and ears." During the war years, she advocated for improved employment opportunities for women and minorities and helped her husband...

More summaries and resources for teaching or studying Eleanor Roosevelt.

Eleanor Roosevelt from UXL. ©2005-2006 by U•X•L. U•X•L is an imprint of Thomson Gale, a division of Thomson Learning, Inc. All rights reserved.