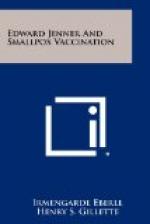 Edward Jenner - Research Article from Science and Its Times

This encyclopedia article consists of approximately 2 pages of information about Edward Jenner.

Edward Jenner developed the medical procedure known as vaccination, or the inoculation of cowpox to prevent smallpox. He also conducted research on the cuckoo bird, promoted a new method of preparing emetic tartar, and observed the structural changes in the heart that are associated with angina pectoris.

Born May 17, 1749, Jenner was the third son of Reverend Stephen Jenner of Berkeley, Gloucestershire. After being educated locally, he entered into an apprenticeship with Daniel Ludlow, a surgeon-apothecary in Sodbury. In 1770 he traveled to London and became a house-pupil of surgeon and anatomist John Hunter (1728-1793) at St. George's Hospital. Jenner obtained a fellowship to the Royal Society in 1789, and received his medical degree in 1792 from St. Andrew's in Scotland. His personal and professional lives were centered in Cheltenham, where he lived with his wife, Catharine, and three children, and where he worked as...

More summaries and resources for teaching or studying Edward Jenner.

Edward Jenner from Gale. ©2005-2006 Thomson Gale, a part of the Thomson Corporation. All rights reserved.