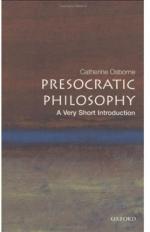 Early Greek Matter Theories: the Pre-Socratics to the Stoics - Research Article from Science and Its Times

Between the sixth and the third centuries B.C., the classical Greek philosophers proposed numerous theories regarding the material composition of the universe, with those of the atomists, Aristotle (384-322 B.C.), and the Stoics emerging as the major alternatives. While providing the intellectual foundations for subsequent developments in Western chemistry and physics, the primary purpose of these theories was not to offer a scientific account of nature in the modern sense, but rather to pose and answer philosophical questions regarding the structure of reality, the certainty of knowledge, and the formulation of ethical principles.

Like those of other ancient civilizations, the earliest Greek cosmological theories were mythological accounts of the creation of the universe by the gods. However, in about 600 B.C. a tradition of speculative thought emerged that...

More summaries and resources for teaching or studying Early Greek Matter Theories: the Pre-Socratics to the Stoics.

Early Greek Matter Theories: the Pre-Socratics to the Stoics from Gale. ©2005-2006 Thomson Gale, a part of the Thomson Corporation. All rights reserved.